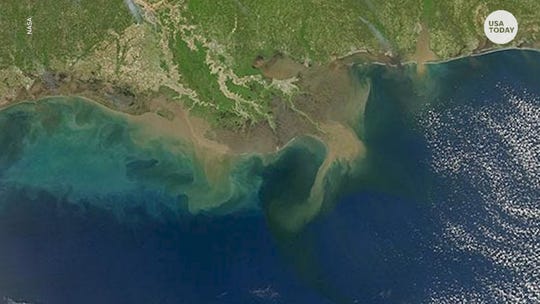 Gulf of Mexico ‘dead zone’ was projected to be the second-largest on record this summer. (Photo Credit: NASA)

Rendon has been a member of Iowa Citizens for Community Improvement for over 20 years. The group works on immigration, trade and environmental issues including pollution from large farms that the group believes contaminates the Mississippi River to the Gulf of Mexico.

For Rendon, the hypoxic waters, or “dead zone” problem at the mouth of the Mississippi, is caused mostly by corporate farming and runoff of nitrate fertilizer in Iowa and other states. His hope is that Sanders, the Vermont independent, will have the vision as president to address complex agricultural and environmental problems.

Six months ago, the dead zone was about the size of Massachusetts. Its waters have little or no oxygen and it is killing fish and other organisms, endangering the livelihoods of those who depend on the Gulf’s seafood.

Adam Mason, state policy director for the Iowa citizens group, said it worked with a lot of communities to stop construction of “factory farms” and combat the pollution he says they produce. According to Mason, Iowa is No. 1 in U.S. hog production with more than 26 million hogs generating over 22 billion gallons of liquid manure that’s dumped untreated onto Iowa farm fields and can runoff into waterways.

“This liquid manure, in addition to having lots of harmful bacteria, has nitrates and phosphorus, so we see that as a significant contribution to both the water crisis we have here in the state of Iowa as well as the dead zone,” Mason said.

The Iowa Pork Producers Association believes there is no science to support the claim that pork farming has any relation to the dead zone in the Gulf, according to Dal Grooms, the communications director.

But in 2018, a group of university studies collaborating with the National Oceanic and Atmospheric Administration attributed the dead zone to nutrient pollution. One study, by the University of Michigan, concluded that “the Gulf’s hypoxic zone is caused by excess nutrient pollution, primarily from human activities in the watershed, such as urbanization and agriculture,” it said in a statement.

University of Iowa researchers concluded that Iowa was responsible for a large portion of nitrate pollution using data collected from 1999-2016.

Read more at The Daily Advertiser.