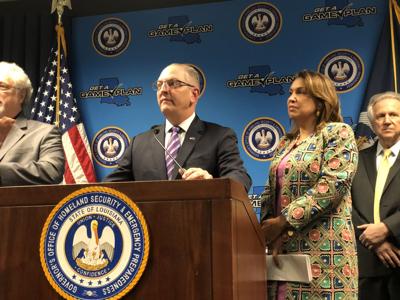 Edwards declared a statewide public health emergency, adding that “it is worrisome” to see the coronavirus spread across the state.

Three of the positive tests were linked to the Lambeth House, a retirement home in New Orleans, the governor said.

All told, 10 of the cases are in the metro New Orleans area, state officials said. One person is either is from or hospitalized in each of Iberia, Lafourche and Caddo parishes.

The cases are considered presumptive until they are confirmed by the Centers for Disease Control.

Limited information about the 13 people who tested positive has been released due to privacy laws. But New Orleans officials have said that the first case there came from the virus spreading within the community rather than from foreign travel by the person who was infected.

Separately, Loyola University canceled classes scheduled for this Thursday and Friday and said it would hold classes only online starting next Monday. Tulane University said it is canceling all classes till March 23, when will resume with all classes online.

LSU officials said earlier Wednesday that they are watching developments closely and weighing the possibility of closing the school after spring break, which occurs during the week of March 22.

Edwards advised higher-education leaders to consider going online, but he said he trusted them to make the decisions.

Edwards said the state would prohibit its employees from traveling risky areas overseas.

The earliest a vaccine could be made for the coronavirus would be in about 12 to 18 months, according to the Health Department.

Read more at The Reveille.